UR3 is their new, smaller table-top robot for light assembly tasks and automated workbench scenarios. The compact table-top robot weighs only 24.3 lbs (11 kg), but has a payload of 6.6 lbs (3 kg), 360-degree rotation on all wrist joints and infinite rotation on the end joint. These unique features make UR3 the most flexible, lightweight, table-top robot to work side-by-side with employees in the market today. It’s an ideal choice for applications that require 6-axis capabilities where size, safety and costs are critical. 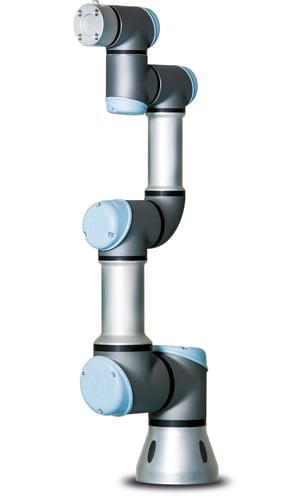 UR3 is an optimal assistant in assembly, polish, glue, and screw applications requiring uniform product quality. The new table-top robot can also be used in a separate work station mounted on the table, picking, assembling and placing parts in optimized production flows.  Because of its compact form and easy programming, it’s easy to switch it between tasks to meet agile manufacturing needs making total cost of ownership low and payback period ultra fast.

The UR3 is built with the same proven collaborative technology as our UR5 and UR10 robot arms. All three robots feature the same safety system and 0.1 mm repeatability. UR3 has a default force sensing of 150 Newton but can be set to stop if it encounters a force as low as 50 Newton in its route.

UR3 table-top robot in short 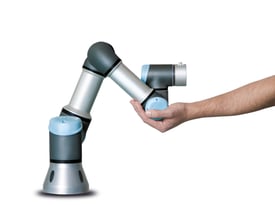 Have a robot application? Fill out the form to get started!