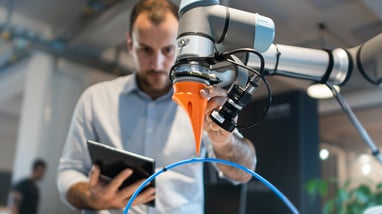 With MIRAI, industrial robots can handle variance in position, shape, or movement in the workspace. Using artificial intelligence, the MIRAI controller generates robot movements directly and in real-time, as opposed to outputting individual measurements. Deploy MIRAI in assembly, quality inspection, machine tending, contour following, or other applications. MIRAI can be used for multiple steps within a task. It can also be flexibly retrained for new tasks.

Skills are not programmed but trained through human demonstration in a few days — no knowledge of programming or AI necessary. To train a robot, a human performs repeated demonstrations of a task by manually guiding the robot by the robot’s wrist. The movements are recorded by a nearby camera and a force torque sensor and are then transformed into a MIRAI skill.

Ask Us About Micropsi